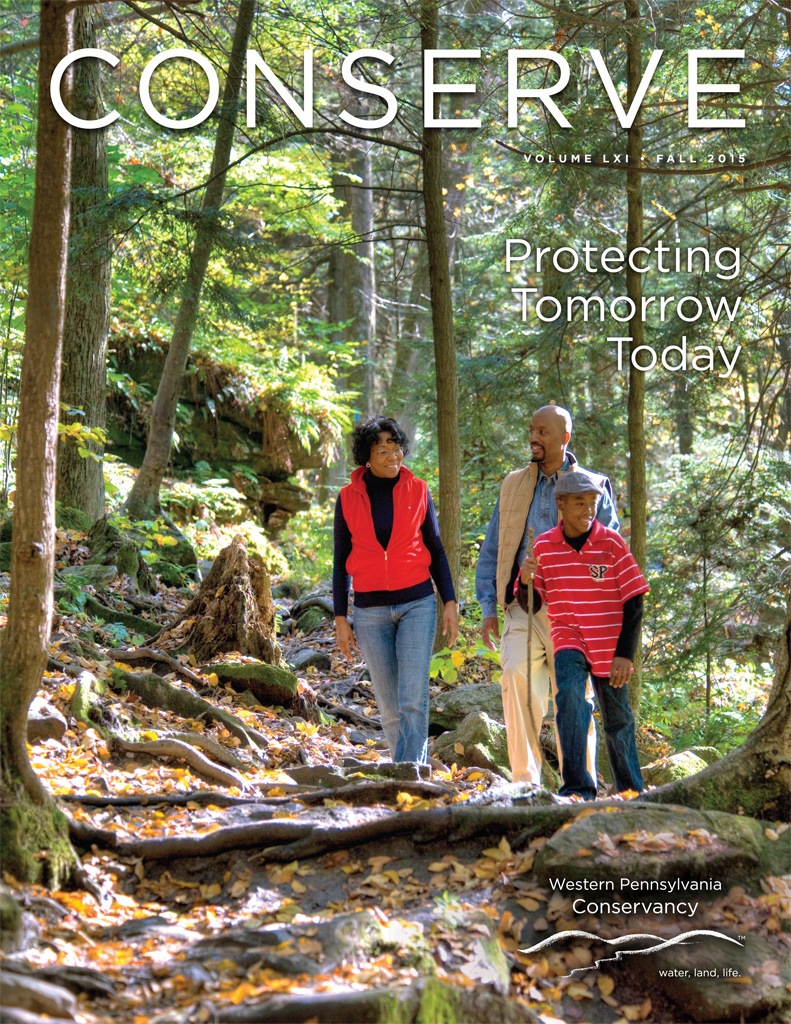 Shooting the photographs for the Conservancy’s photo library

We actually shot this photo a few years ago and I just received a PDF file from the client the other day.  The original shoot was done to create a “picture library” that the client could pull from as needed, and this magazine cover photo is the result.  Since this photo wasn’t shot yesterday, I’ll my hardest to remember the primary issues in its creation.  If nothing else, for those interested in commercial and lifestyle photography, this may prove to be an educational analyzation of a typical location, commercial photography shoot.

The creative staff at the Conservancy hired me to create a bunch of photography for them, when the fall season was at its peak.  I have to give them a lot of credit for that.  Few companies have to foresight to bite the bullet and spend money for photography, before it’s actually needed.  Fall only happens once a year, and it’s really hard to shoot fall photos in the spring…

Shooting pictures with a purpose

Most marketing professionals face a similar problem when trying to advertise or promote their company’s businesses. There always seems to be a lack of quality professional photography, shot by a “Professional Photographer”, and not the secretary’s brother-in-law.   Sure, professional-quality dslr cameras are getting better and cheaper, but having access to cameras and knowing how to use them are two different things.  A professional commercial photographer knows how to manipulate the focus, perspective, exposure, and photographic lighting, in order to give a pleasing look that accomplishes a company’s marketing goals.  Sometimes the goal of a photo is to get just a “pretty picture” to use as a filler, but often times there is a need beyond that.  Photos , may need to do other jobs too, and this picture is a really good example of that.  Notice how there is negative space above the models that allows this photo to be used as a magazine cover.  An amateur photographer probably would not have thought to leave needed space for the masthead and copy of a magazine cover.  A professional commercial photographer, would.

Working with the models

The people in this shot are professional models from either Docherty Casting or The Talent Group, I can’t remember which.  Both Pittsburgh agencies are quality representatives for local models, actors, and voice-over talent.  The man and woman in this shot were both professional models and I guess the boy was too, but with much less experience.  This is the kind of photo shoot were you can plan only so much and then you just have to let things happen and adjust and adapt to things as they evolve. It helps to have experienced models, but in the end, there are many factors that go into a successful commercial photo shoot.

To me, besides the casual manner and spontaneity of the models, the thing that makes this shot work so well is the wardrobe.  The wardrobe needed to be season-appropriate and also of a color that would separated the talent from the background trees and shrubs.  To pull this off, we chose red as the main color.  The budget of this shoot wasn’t huge, so we had to rely on what the models showed up with, but we were able to make suggestions before hand and then  make our selections from what they showed up with.  Red is a color that tends to jump out of any picture, especially when set against a contrasting color like the green of the trees.  Blue jeans are a little too close in color to green to separate much, but when hiking in relatively cold weather, jeans were a logical choice.  While the color wasn’t perfect, jeans met the season-appropriateness of the shoot.

In some photos shoots involving models, a photographer can get very specific when posing the talent, but most of the times it’s not a good idea.  It’s better not to micromanage the process and let the models “do their thing”.  The resulting photos end up looking much more natural that way.  For example, with this photo, if I would have tried to pose each model, chances are that the photo would have looked “staged”?  It’s hard to pose someone so that they look as though they are walking.  It’s much better to just have them “walk up the path” and take a bunch of pictures as they do so.  Sure, the models had to walk that same path twenty of so times, but in the end, the photo looked natural and not posed.

Maybe “posing the models” isn’t the phrase I should of used in describing this photo.  Maybe I should of used “directing”, instead of “posing”.  I think it’s important to direct the “eye direction” of the models.  That greatly influences the “flow” of the composition.  It’s a well-know fact that the first thing a viewer looks at in a photo, is the eyes of the main subject. After that, the viewer tends to looks in the direction that the main subject is looking at.  The photographer can use that tendency to guide the viewer’s eyes around the photo.  What I did was to direct each model to look in a certain direction as they walked up the path.  Like I mentioned, we did this over and over, changing things around slightly.  We changed the order in which the models came up the path.  As I remember it, that was a biggest variable of the entire shoot.

I think that they boy’s stick added a lot to the photo.  I can’t remember who came up with that idea, probably the boy just picked it up and started playing with it and one of the crew recognized that it brought some reality to the image.  However it happened, I think that it added to the photo’s realness and I’m glad we lucked out the way we did.  As a photographer, you need to keep your eye out for “happy accidents” like this.  More times that not, they can “make” the photo and tend to counterbalance “Murphy’s Law”, just a little.

First, I found a location that I thought looked good.  I knew that we wanted a vertical and that leaving a lot of room above the models would give the graphic designer room for “copy” or possibly a magazine “masthead”.  The foreground in this shoot is also very interesting, which adds a lot to the composition of the photo.

As I recall, I used my Nikon D700 with an 80-200 F2.8 zoom lens, for this shoot.  The depth of field was intentionally shallow, so I probably chose to shoot the image either wide-open (f 2.8) or more likely somewhere around f4.  I probably went with f4 because I had multiple subjects to keep in focus.  By throwing the background out of focus, I was able to make the subject models jump off the page using a photographic technique of  “sharpness” on “softness”.  The viewer of a photo tends to look at what is sharp, which in this case is the models enjoying the great outdoors.

Like in most outdoor photography, the lighting was natural, but it was also taken into account.  By selecting to shoot into the sun, we didn’t have to worry about “blotches” of light hitting the faces of our models.  Instead, if the sunlight did make it through the leaves to hit the talent, an edge light was created that tended to separate the models from the background and add “dimension” to to the photograph.  Notice too how the root in the foreground goes very dark and to some, may look underexposed.  To the novice photographer, that may be a bad thing, but the professional realizes that darkness adds needed contrast to image, making it more pleasing to the eye.

While the models are in shade, the ambient light that is hitting their faces, is coming into their faces in a pleasing manner.  If the primary light direction was coming from above, instead of from the front, the eye sockets would had cast a shadow that would of made the people less attractive.  This is a very important difference between professional and novice photographers.   Professionals will be able to recognize good lighting.  They’ve trained their eyes to see the difference between good and bad lighting.

I’d like to thank Randy Schreiber from the Western Pennsylvania Conservancy for sending me the PDF copy of the magazine cover and for giving me the opportunity to be the photographer on this project.  Spending a day or two taking photo is the woods near Pittsburgh, is a great way to pass the time.  I love my job… :o)